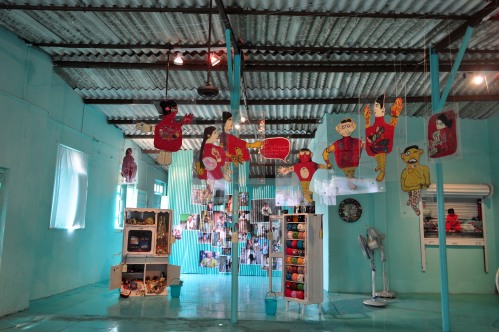 On that narrow lane off 90 Feet Road in Dharavi, a truck can block all view ahead. Yet, in such a place, a curious crowd had gathered under a yellow shamiana that Saturday evening. There were local women and children dressed in their shiny best. There were those from lands beyond Dharavi in their ethnic kurtas and cool tees. Passersby wondered what all the commotion was about. And as fleeting glances deepened into interest and the crowd spilled into the street, we knew that this was going to be one exhilarating evening.

The assembled had gathered to attend an exhibition on health.We were calling the exhibition Ghar Pe (At Home) and it was an installation of art pieces made by our participants. Every piece evoked a particular aspect of health and was the culmination of almost a year’s efforts in creativity, conversations and skill acquirement. Mosquitoes embroidered on windows, photographs spread on utensils and dreams moulded into ceramic slippers were just some of the examples of household items that were afflicted by a healthy dose of art.

The inaugural was preceded by a frenzy of photos taken by and of the participants of Dekha Undekha. We would have continued with glee into the night had it not been for the gentle intervention of Jaya Nuty who hosted the programme. For the inaugural, Dr. Shanti Pantavaidya traced the journey of every woman, the SNEHA youth group performed a spirited Marathi street play on safe sexual practices and those who had put together the exhibition, through art or administration, were felicitated.

The hall that is part of Ganesh Vidya Mandir was painted a turquoise green and saw almost two hundred and fifty visitors that evening. Among those who burst with excitement into the exhibition was Akku Behn, a middle aged sweeper from the neighbourhood. For Akku Behn, who had never been to an art exhibition before, the art pieces made by our participants led her to say that it is great that women are doing something different and it is important that women do more such things in their lives. And then in the crowd, was the little boy who wanted a fabric globe off a dream slipper to play with. And there was the sound of many an air kiss blown into the noisy room.

The artists who had just been felicitated were exuberant when they saw people paying close attention to their art pieces. This was yet another moment when a craftswoman metamorphoses into an artist and they recount a terrific time explaining their art to curious visitors. Zarina from the photography group feels that this exhibition is sure to bring about change in the neighbourhood.

As the street lights came out, the crowd  ventured outdoors. But we could see that everyone who had come there that evening returned with a bit of turquoise.

This house shall be green. With shades of blue infused. It shall be a shell of turquoise with elements of white. This is the colour that we paint on the walls of our houses. You take a walk on the streets of Dharavi and you will soon find a house just like ours. We announce that we are here.

This house shall have a bed, a cupboard, a television and a stove. It shall have real furniture and each piece will tell a story and share a memory. The furniture is not perfect; its material is replaced with experience. The house shall have that which makes it a home.

This house shall be my body. Everything in it, from the big pieces to the small, is symbolic of what I am. My emotions, my stress, my ill health, my happiness, my leisure, my diet – all of these are embedded into the house. Watch me as I grow into you.

This house shall be a playground. It shall have things rising from the floor and suspended from the ceiling. You will want to play, to explore, to touch, to feel and to take in every colour that our artists put into the furniture. It is bound to stir up your curiosity.

This house shall also be a bridge. People have conversed and dialogues have emerged. People will argue while discussing it and people will agree while building it. It will connect that which was considered disparate. Bonds will be forged, ties will be made.

This house shall gather dust. It shall get crowded. It shall be noisy.

This house shall be a beginning.

A Shot at Kala Ghoda

Asma B. Qasim, Nandita Kumar and Sunita Anthony D'Souza (from left to right)

Our feisty photographers were at The Kala Ghoda Festival 2012 (KGF) to showcase the works of the photography team of Dekha Undekha. A couple of days earlier, it had been hectic – selecting the photos, printing, mounting and readying the exhibition stall. A mad rush later, Sunita D’ Souza and Asma B. Qasim found themselves representing their team and strolling down the unusually crowded Rampart Row.

The exhibition at Kala Ghoda was the resultant effort of mentor-photojournalist Sudharak Olwe’s workshops with the photography team. The photographs chosen for the exhibition highlighted a slice of Dharavi life. The joys and travails of monsoon, children playing, mothers and populous homes were powerful stories of vulnerable humanity living in harsh, extreme conditions.

It was quite a thrill to see the many followers of the KGF take in the poignant photos. Asma and Sunita asked onlookers for their reactions to the photography exhibition. For most people at the KGF, Dharavi is a place they pass en route to work. To stop and observe the more detailed conditions of life over there was something they did not do very often.

Photographs have the power of revealing the truth in a passing moment. Abhijeet Umathe, who was there with his family, remarked how the photographs showed the indifference of the people living in Dharavi. “Their indifference is different from ours. They live in abject conditions but do not seem to mind it all. For example, this boy is playing cricket right in the middle of a dump yard,” he continued pointing to one of the photos. While Abijeet seemed moved, his five year old daughter begged to differ.

The possibility of indifferent voyeurism always threatens such an exhibition. Dharavi, as the centre of sordidness and poverty, could induce pity in the audience. But Sunita and Asma do not agree with this. In fact, what they noticed at the KGF was that people really connected with the events in the photos. Sunita mentions how viewers loved the mother and child photos and Asma observes that when people saw the photos in which children played and were reminded of their childhood days. Both went on to add that even at the risk of voyeurism, it is important to highlight the conditions in which people live in Dharavi. Much change is required.

For these two ladies, the exhibition was a real eye opener. Asma says that she was offered a compliment that “There is a lot of energy in your photos.” But, when you see passersby click photos of your photographs, there is really no need for a greater compliment.

Abhijeet Umathe and his daughter at the KGF

Our photography group at the KGF!

SNEHA invites you to Dekha Andekha/Seen Unseen, an exhibition of photographs on life and health in urban slums. These photographs have been shot by Sunita, Komal, Asma and Zarina, women survivors of domestic violence and Rohit and Rupesh, young community volunteers trained by SNEHA. The photographers have been trained by photojournalist Sudharak Olwe.
On from the 4th to the 12th of February 2012 at the Kalaghoda Arts Festival. Pavement Gallery opposite Joss.
Please do visit the exhibition to encourage the budding photographers.

Art pieces by the participants is being showcased at our exhibition “Ghar Pe”.

Do come home. It is going to be fun, creative, informative and turquoise in colour! 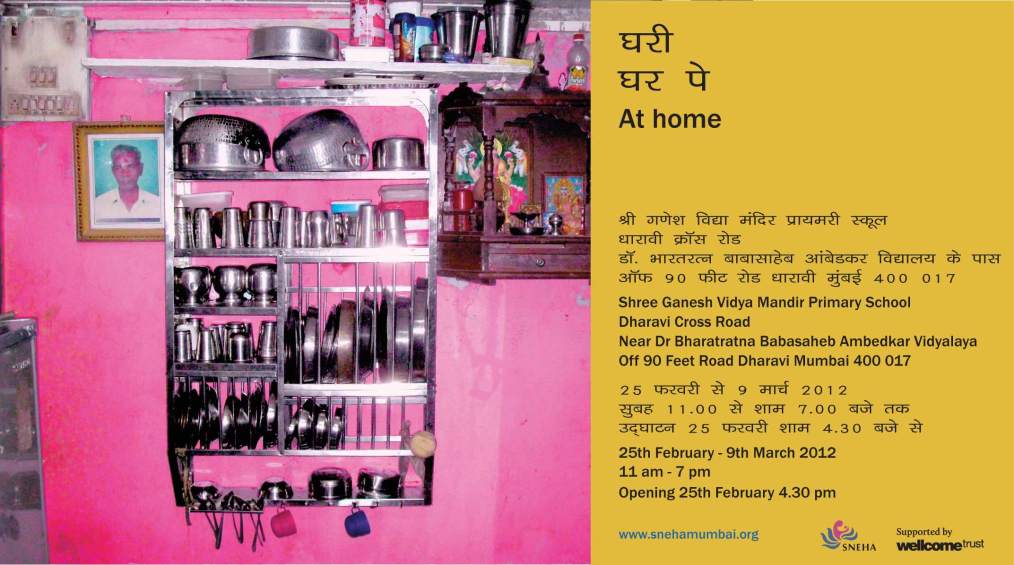 My Kith and Kiln

After four in the evening, you wonder how it is that the dogs sleep so serenely in Kumbharwada, Dharavi. Smoke, slowly swirling and darkly stinging, engulfs the place as the potter community set fire to their kilns. People move into the interior of their houses, shops pull down tarpaulin curtains and ends of sarees become futile gas masks. It looks dismal but it is the smell of livelihood in the air.

Ashwin Solanki, a potter, makes little terracotta pots for a dairy farm in Marine Lines. He makes 300 of these everyday and fires them in the evening. A typical firing involves a stacking of the following: a metal sheet in the base, a crowd of the pots, cotton, mill waste and leather waste. The fuel used is highly toxic as the mill waste is soaked in oil and chemicals. After a firing, Ashwin says he is so nauseated by the fumes that he can hardly have dinner and simply sleeps it off.

Daksha, his relative, has been dealing with an affected throat for the past three months. Her larynx burns and she has developed a husky voice. She has visited a doctor once but medicines have not helped due to the constant exposure to the fumes in the environment. And this is not the first time this has happened to her. She now sounds a lot like Rani Mukherjee, but misses her own voice.

Longevity is affected among the kumbhars, what with many of them developing tuberculosis, cancer and asthma. Spells of cough and cold are a common affair here. There is local talk of a pregnant woman who complained to the police about the fumes affecting her, but the police allegedly supported the potters. While firing, the men are not provided with any masks. Malaria, on the other hand, is not a threat here as the smoke clears the air of the diminutive mosquito. During the monsoon, however, it is a different story.

The current method of firing followed by the kumbhars is one they have followed for generations. They are aware of the non-hazardous gas kilns but are slow to switch over. The earthen kilns or bhattis are lethal but they are also the most efficient method of firing. Products are fired in bulk whereas in a gas kiln fewer pieces can be loaded. 10 kgs of industrial waste cost Rs. 60 whereas a commercial gas cylinder costs Rs. 1300. Domestic gas cylinders, which cost Rs. 400 apiece, are not permitted for commercial use. The ratios are self-revelatory for the potters’ fidelity to traditional kilns. No smoke gets into their eyes.

While cleaner fuel could be a solution, Ashwin knows that a government subsidy on commercial gas cylinders is the key. This could relieve the toxicity levels of the place by encouraging the potters to adopt gas kilns. This means that primarily gas kilns will have to be introduced into their process but they are financially thwarted to do so.

When Ashwin looks at his two year old niece, he worries about the future. He says that it wouldn’t be a bad idea to leave this line of business. The little girl plays around in the street and rubs her eyes red as evening sets. Till the dawn of better provisions and subsidies, a potter dreams on.

The WordPress.com stats helper monkeys prepared a 2011 annual report for this blog.

A San Francisco cable car holds 60 people. This blog was viewed about 1,200 times in 2011. If it were a cable car, it would take about 20 trips to carry that many people.